Experiencing it is different than reading about it. 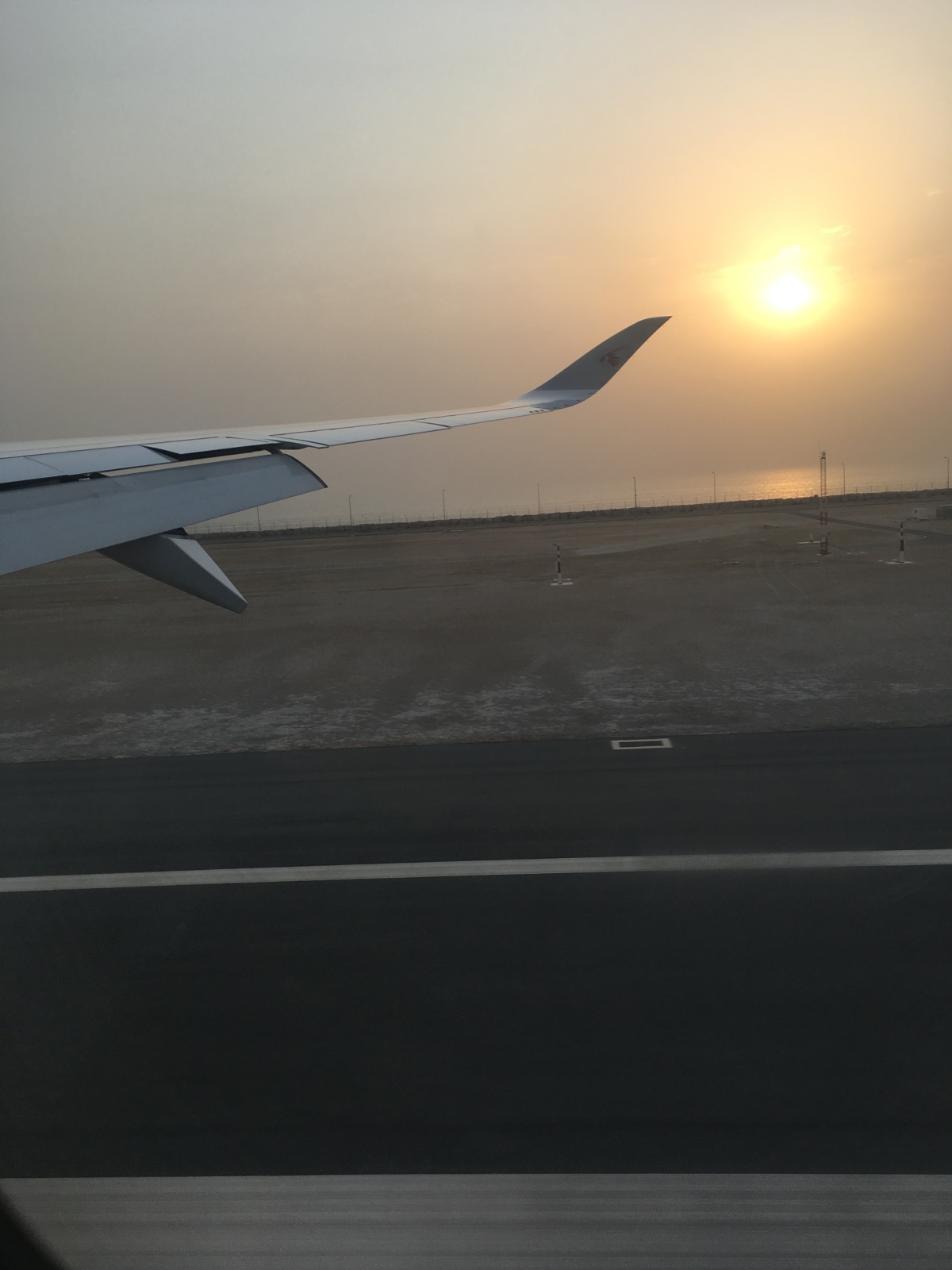 It’s almost been a full two days since my arrival in Qatar and honestly where do I start?  I often wondered, while reading other’s blogs, why they just drop off and why there is such a break in between their post and now I know.  1) You get so busy that it becomes difficult to make time for it or  2) You get so overwhelmed that you don’t know where to start or 3) You are too tired to even care.  I am a mix between 1 and 2.  Let’s start with the journey…

My sister, best friend sister and mother in law drove with us to PHL airport.  We needed all three cars as we had a lot of luggage.  It was sad saying good bye and I’ll admit I shed a few tears.  We checked in our luggage, which took some time because as I mentioned before, we had a lot of it, 8 pieces to check in to be exact and 8 pieces to carry on.

The weight allowance for checked luggage on Qatar Airways, leaving from U.S.A, economy class is 23kg or 50lbs. You are allowed 2 free checked bags at this weight.  If your bags weigh more than this, but not to exceed 32kg or 70lbs, than you can pay $50 online up to 6 hours prior to your flight or $65 at the airport.  We knew that 3 of our bags were over the weight but did not pay online so we had to pay $195 at the airport.  We could have shipped our items but shipping freight to Doha is expensive, more than $1,000 for not much so we opted to just pay overweight fees.  It cost $200.00 per extra luggage, which still would have been cheaper but for 60 pounds over weight, 20lbs for 3 bags each, we still saved money.  Also they have the right to reject extra luggage so we didn’t go that route and plus the added cost of buying extra luggage just didn’t balance out. They also check the weight of your carry-on bags which should not exceed 7kg or 15lbs. You are allowed one carry-on per person and a personal item, which is really two carry-ons. Several of our carry-on bags were overweight but the attendant who helped us let us go.  They also requested a copy of our visas at the airport.  I have no idea why. I n all, I think we did pretty good with packing and the luggage in general.

Once we got our luggage squared away, we got our boarding passes and proceeded to security.  We waited in line for our turn only to be told to go back downstairs to the ticket desk because only our first initials were printed on the passes.  This was now 1 hour from boarding time and we started to lose patience.  We got that taken care of and got thru TSA without incident.  We found our gate and had only enough time to use the bathroom and then line up for boarding.

The plane was huge.

It was the biggest plane I had ever been on.  The inside was beautifully lit with pink and blue lights.  The seats reclined.  The 12+ hour flight was ok. There was some turbulence but not too bad.  The flight attendants were nice.  They were always coming around with their carts offering beverages (including free liquor, even Hennessy).  They served three meals and even accommodated my vegan diet. (BTW you can select your seats and special diet online prior to your flight)  Even though we were prepared with jackets, blanket, pillows etc.., they also provided some of these things like a blanket, eye mask, ear plugs, compression socks, pillow and headphones.  My husband said they kept flashing messages on the tv to remind people to walk around, hydrate and moisturize to help with the long flight.  But I never saw those messages; that must have been while I was asleep.  They provided a variety of movies, tv shows and music channels to keep you entertained.  It was a long flight but it didn’t feel super long and I only slept about a total of 3 hours.

Upon landing in Doha, my husband and I were the only 2 people that clapped.  I always clap when I land, because I’m happy we made it safely and I clap for the pilots for a job well done.  Is that just an American thing?  Well, we exited at the back of the plane, strangely, on the tar mat and boarded a bus, which took us to the arriving terminal of the airport.  I prepared myself for extreme heat but it wasn’t too bad, maybe because it was 6:00a.m.  We went through customs and collected our items without incident.  I exchanged some U.S. money for some QAR (riyals) and purchased 2 Qatari SIM cards.  My Vice Principal met us and….

Don’t expect to get what you expected

…she told me that my housing had been changed.  The villa that I was told that we’d be living in and was looking forward to living in, close to my son’s school and the mall, with a maid’s quarter, 4 bedrooms, 3 living rooms, etc, etc… was not to be.  Instead we have been placed in a 3 bedroom villa with 1 living room, and no maids quarter,  30-45 min from my sons school.  It is one of the Beverly Hills Gardens compounds.  And although it is nice, it is not El Berr, as expected.  On a positive note, it is close to my job, the beach and the airport.  Also one of the teachers that I have been SKYPing with over here is now my neighbor and we work at the same school.  I only met 2 of my 16 neighboring families because most of them are still on summer vacation.  From what I have been told, there are several families with teenage boys that live in this compound. That is another added bonus.  We have a nice pool and small fitness center.  Our villa is furnished with older furniture but it’s not too bad. We had some dishes, an ironing board and iron, and some other things that the school purchased for us.  It’s called a soft package.  One of our neighbors and a school leader took us to the market to get some food later that day because none had been left for us contrary to what was supposed to happen.  When we got back, someone had dropped off some bread, milk, eggs, and jelly.   I was glad we went to the market, because who can survive off of that menu.

We were so tired that I really can’t remember much after that.  We took a nap, then were taken to a different market.  I had a headache that night, not sure what from.  It could have been from a number of things.  I took two tylenol PM’s and went to sleep about 2:00a.m.  I didn’t wake up until after 1pm.

I used the fitness center today while the boys swam in the pool.  It’s nice to have a fitness center in the front yard.  I can get used to that.  Tokitha (my friend from North Carolina) and I hooked up today.  She sent me a driver and we all went to the mall.

Experiencing it is different than reading about it

… some people really do brush by you, reach over you, lean over you, stare at you and bust in front of you without a single word.  I just look up like WTH and keep it moving.  For the most part, everyone has been nice and Qatar is like a melting pot of many different cultures.

Neither our cable nor our internet works.  Thankfully our neighbor gave us her code so we can access the internet while sitting on our steps in our house.  It’s the little things.

Life in Qatar will take some adjusting and patience, I just hope I can stay positive and keep an open mind.

On another note, I completed my TEFL online course before I left the states.  I have obtained another certification.  It was completely online and done at my own pace and even though I already secured an overseas job, it still makes more opportunities available to me and I learned a lot.  And I accomplished what I set out to do, which was to complete it before I left.

…So welcome to Qatar! 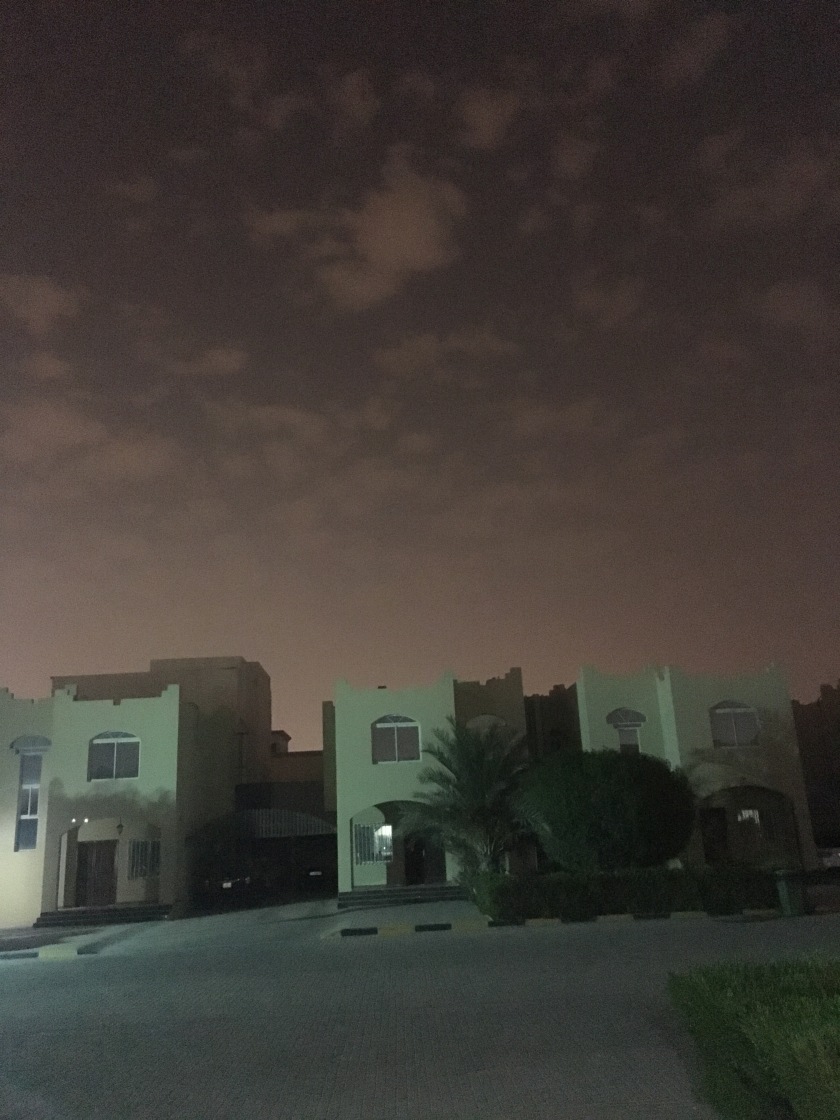 3 thoughts on “Welcome to Qatar”