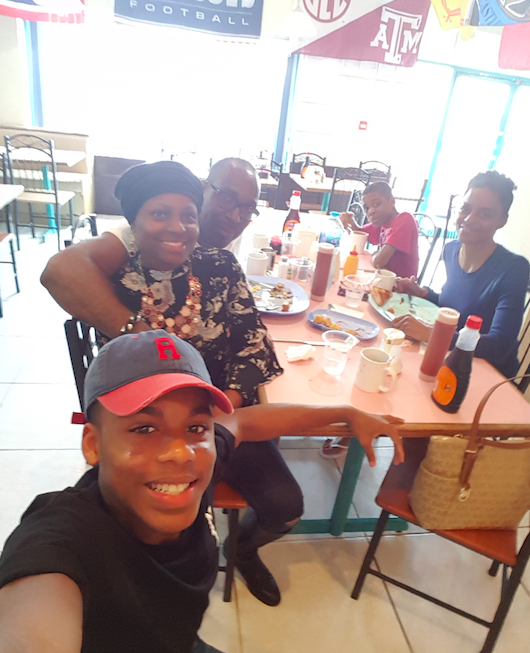 I knew that if anyone would come to see me overseas it would be my big sister and the day finally came on Friday, January 31.  She traveled a long way to see me and the boys and I wanted her to enjoy herself, so I had a lot planned.  As soon as I picked her up from the airport, I took her to our villa, we changed clothes and I whisked her off to brunch.  Brunch is a big deal in Qatar and I wanted her to experience it.  After brunch, I took her back home so she could rest because Jet Lag is no joke.  On day 2, we went to the Villagio Mall and walked around. We grabbed some food and headed home because Jet Lag is no joke.

me and my big sis 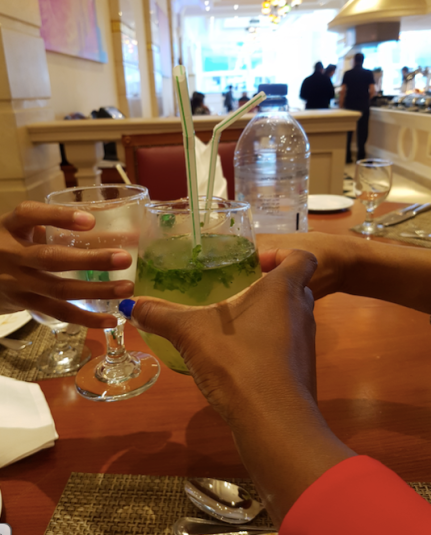 a toast to family

On Sunday, my hubby arrived and life was grand.  We grabbed some breakfast at Ric’s Country Kitchen and took a stroll down on the Corniche.  Later on we met up with some friends at Souk Waqif.  There was a festival happening there.  We grabbed some dinner, watched the parades and enjoyed a shisha.  Afterwards we walked back over to the Corniche and took a Dhow boat ride through the Gulf.  I’ve seen these boats every time I’ve gone down to the Corniche but never went on so this was something new for all of us. We had a great time.  We played our music, danced, talked, took pictures and enjoyed each other’s company.  It was actually one of my favorite days in Doha. 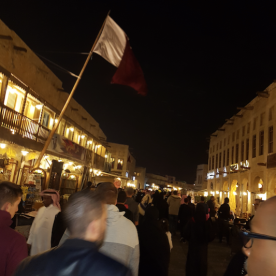 [But there was a small mishap that occurred that I feel the need to mention.  It was pretty crowded in the souq and as we pushed through the crowd to make our way out, a young man who was walking with some other guys, yelled at my husband, “what’s up Nigga!”.  Pause right. WAIT, WHAT!  My husband stopped in his tracks and turned toward the guy.  He was ready to fight, so I wrapped my arm around his, turned to the guy, yelled, “watch your mouth”, and pulled my husband away.  After discussing this issue and calming my 6 foot, 215 lb, black, husband down, we summized that maybe, just maybe, the guy was being cordial.  Granted it was extremely disrespectful and inappropriate but the guy’s face was total shock when he saw my husbands demeanor change, and the way he said it was not disrespectfully. Of course he was not African American, nor did he look white but you don’t say that to a Black man if you are not black yourself.  You don’t say that to a black man if you are black and you all do not have that type of relationship.  Unfortunately, it is in the music and people that don’t know any better think that, this is okay.  IT IS NOT OKAY! In fact in America, you pretty much get your ass whooped or killed for saying something dumb like that out of your mouth.  But we are not in America, so some things you just have to shake off and not take personal.  You learn a lot here!] Moving on…

The next day I was hosting my first get together at my villa.  I did it for several reasons. One big reason was because I wanted my sister and hubby to know that we are surrounded by support and we are ok.  Also we were catching our flight to the Maldives at 2:00 a.m. (be sure to read my blog on the Maldives) and I wanted to get the party started early.  The get together turned out really nice.

While Darryl and I were away, I left some money with the boys so they could take Ericka out.  On Friday, Feb 3, it was Ericka’s birthday and I had planned a surprise dune bashing event for her.  Unfortunately, it was a sand storm that day but they said they had fun. When Darryl and I returned, I got really sad because they would be leaving me in two days.

On Sunday, everybody left, and the house got real quiet.  I had finally had some familiarity here with me in Doha and for a short while, it really felt like home.  Depression can set in really fast when you are overseas.  You have to work hard to not fall into it.  Blogging helps me as well as planning trips and planning for my husband’s next visit.  I have to remind myself why I’m here, but I know I wouldn’t trade it for going back home.  It’s not easy every day.  Some days are better than others.  Some days I feel really sad and melancholy. The first few days after they left felt like pure torture. I could not get rid of the lump in my throat. 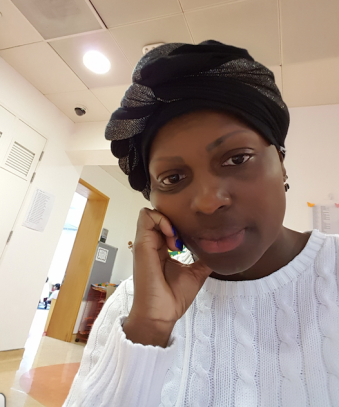 But there are way more days, that I’m happy.  Like when I recall all the traveling I’ve done since I’ve been here, and the traveling I will do that I would not have been able to were it not for this fantastic opportunity.  Or when I look at my American debt decreasing.  Or when I talk to my husband every day and realize how much stronger our relationship has grown.  Or when I look at how much my son has matured over the last few months and learned.  I think about all the people I’ve met and new friends I’ve made and I smile because I have no regrets even when I’m sad.

Having visitors helps a lot.  Having my sister and my husband here at the same time was God sent.  I was super happy that week.  Darryl will be back in April and I can’t wait.  Let the count down begin!