Today was my first time using the Spa at the Warwick hotel. I usually start with a 5 * rating and then delete and add stars according to my experience.

When I entered the hotel, I was instantly overtaken by the smell of smoke. I felt like I was in a casino in America before they added smoke rooms. For someone with Asthma, I automatically made up my mind that I would never stay here. Minus 1*. (not the spa’s fault but still a part of the hotel)

When I arrived to the 7th floor which is where the spa is located, there was no-one there to greet me. I had a 5:00 appointment and I was on-time and there was no-one there. So I took a seat and waited. Five minutes later, a gentlemen arrived and walked passed me on his mobile phone and just nodded. Less than a minute later he walked back passed again and I asked him if anybody was working. He told me that he was calling someone. (He must have been someone in charge) Someone did come about a minute later, handed me paperwork to fill out and confirmed my appointment. Seven minutes later I was in room. This is unacceptable- Minus 2 ** 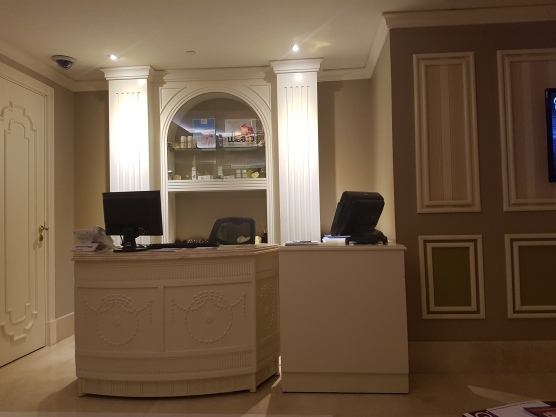 My masseuse was very nice. She said she was from Thailand and apologized that she did not check back at the desk at 5 to see if her appointment had arrived. (valid but why is there no hostess or receptionist on duty).

After being taken to my room, she (my masseuse) had to set up because she was late. So while I tried to undress she was busy lighting candles and had to go and get me disposable underwear because there was none in the cabinet. Minus 1* star

My massage was nice– 90 minute full body massage. She adjusted the temperature when I was feeling cold. I asked her to write her name down so I would remember it. Plus 1* star for the nice massage.

The price was great and I used the entertainer app, so I get one free massage to use another day. Plus 1*.

After the massage I went back to the front to pay and complete a survey. Several male customers were there talking too loud for a spa but whatever. My masseuse neglected to write her name down for me for which she probably forgot. No stars taken away for that.

All together 3 stars for this spa. I will be back for my free massage but I wasn’t impressed by the service or the smoky hotel. Do better Warwick.

**My review is based on my experience and mine alone**

**Update: I recently revisited this Spa for my free massage and I must say I was impressed by the improvement in service. There were 2 receptionist on duty when my girlfriend and I arrived. We were warmly greeted with a beverage, a warm towel to freshen up and our masseuse’s names. The lemongrass smell was so intoxicating that I bought some of the oil. Our rooms were ready and again the massage was awesome. When our massage was over, we were given tea and a survey.  This time the Warwick received 5 stars from me. They really listened to their customer reviews and up’d their game. They have a new special for February, massage and chocolate Wrap, I will be back for mine and I’ll be back monthly from now on!